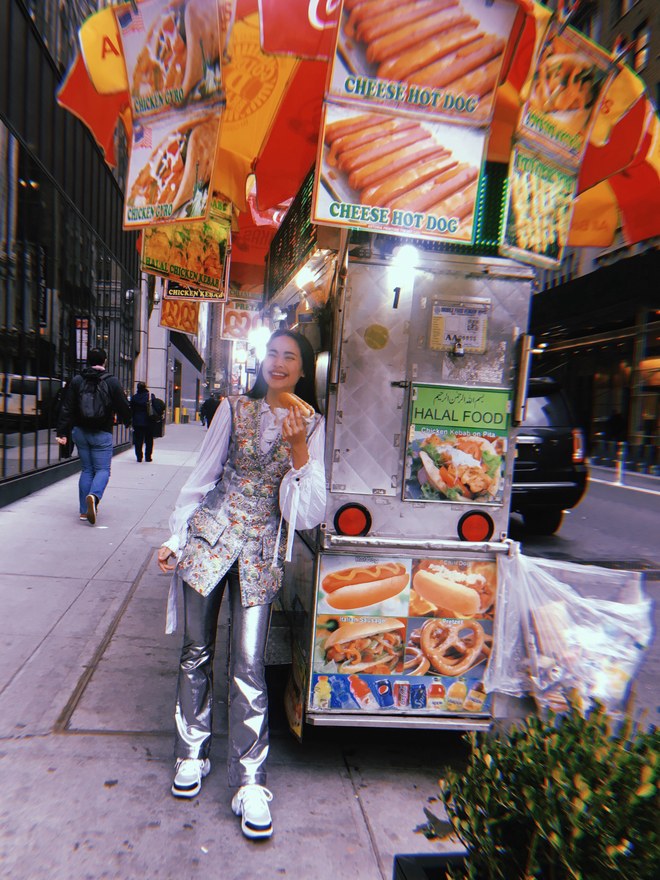 It is 7:00 a.m. and the sun has barely risen over Manhattan, but Urassaya Sperbund has already charmed the entire crew at her Vogue shoot—from the moment she arrived in Times Square at daybreak—with no complaints but a smile, dressed simply in a long dark coat and Louis Vuitton’s Archlight sneakers. The Thai-Norwegian actress, better known as Yaya, has been a superstar in her hometown of Bangkok since her teens, booking campaigns, films, and TV work left and right. Yet despite the fame (and more than 6.3 million Instagram followers), the woman in question is unbelievably down-to-earth. “They don’t make stars like that in the U.S.,” one editor whispers. “I wish they did.”

Yaya is here to spend one whirlwind day in New York (a cheeky nod to “One Night in Bangkok”), beginning at a suite at the Knickerbocker Hotel. The first stop is pure fashion fantasy: a private tour of Dover Street Market before the doors have opened to the public. There’s a new drop of Supreme on the seventh floor—ceramic cups, nylon fanny packs in red and tan—and Yaya’s glee cannot be contained. “I love Supreme,” she says, digging into her purse to unearth her wallet, a slender red piece of Louis Vuitton x Supreme. “See?”

Recently, the 24-year-old has started expanding her international profile, working with Maybelline and taking part in a Louis Vuitton watch campaign, alongside Jaden Smith, Jennifer Connelly, Catherine Deneuve, and other friends of the house. She also sat front row at Vuitton’s Resort 2018 Kyoto spectacular in a lace and cracked leather slip and Spring 2018’s Louvre show in floor-skimming cloud print, marking her official debut as a Ghesquière girl (a marker of cool, if ever there was one). Yaya’s rise coincides with a growing global interest in Thai culture that feels long overdue—particularly in the fashion world, which seeks always to cover new ground. Who better to help them than her?

Back at Dover Street, makeup artist Ingeborg pulls up an old Chanel fragrance campaign with Linda Spierings, a stunning ’80s Dutch supermodel to whom Yaya bears an uncanny resemblance. “I think someone needs to alert Chanel,” Ingeborg says, laughing. Yaya smiles shyly, then darts off to examine more of the fabulous clothes on display.

She tries on Molly Goddard’s ruby slipper of a dress, its layers of crimson tulle swirling around her, and a sculptural Noir Kei Ninomiya harness that hangs by her waist—a fun change from her usual uniform of Champion hoodies and Alexander Wang jackets and tees. “I bought so much at Alexander Wang yesterday,” she says, citing a corseted black top as one favorite. “Salespeople in the States have this way of coming up to you and saying, ‘Oh, this just came in and would look so good on you, just try it on.’ ” Does it work? “Every time!” she says with a laugh.

What else is there to know about Yaya? She’s a dessert fiend who loves chocolate more than anything—her eyes visibly light up when she’s plied with sweet after sweet at Cipriani. Because she was born on a Thursday, her lucky color is orange or red, according to Thai tradition, and the latter is her favorite shade. “Everything has to be red,” she says. Hence her red Supreme wallet, and her delight at snagging a red Supreme tee depicting a plate of fried chicken on it, along with a pile of jumpers, hats, and fanny packs. In the car, she clutches her shopping bag in bliss. “It’s like walking away with gold—better than gold!” she says.

What’s clear is that Yaya truly enjoys fashion, whether she’s twirling in that enormous Goddard or flopping her feet in a pair of Ariana Bohling’s shaggy fur slippers. “I’m having so much fun!” she says—and it’s contagious. By the end of the day, she’s convinced three editors to buy those Archlight sneakers, whose cartoonish proportions had previously seemed unwearable. On her, they looked light as air. Fancy that.